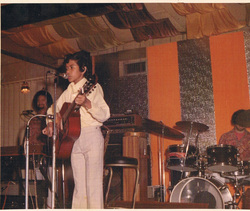 1974, I was 13 years old, I loved those Kiwi guys they were so supportive, they made sure a little 13 year old Murri boy got the opportunity to entertain the audience quite easily, I'll never forget that.

To think I performed on the same stage as Ludy, the Euopean superstar, back in the days when they toured the country playing in nightclubs.

My sister Tjanara Goreng Goreng, and I won the talent quest at the hotel, a component of the prize for winning was a residency for a few weeks.

We certainly made the most of that, fantastic experience and good money, a great start to my career as a musician. 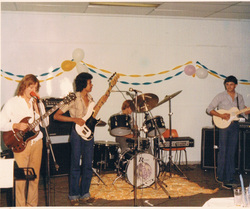 School band, private function
Pete with the White Les Paul
Russell, with the Red SG
Me with my Precision Bass
Graham on the drums.

It was a great serious first band for me, talented people we wrote a few originals as  well and had dreams of Grandeur.

This is the band I worked with on the weekends when I was in Grade 12, instead of studying we spent every weekend down the beach 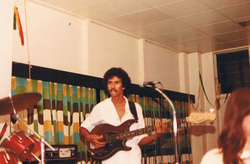 Debbie Doak playing the drums and Jim Langan, playing guitar, I was 19

Shades of Phil Lynnott, Thin Lizzy, at that stage he was my hero, another blackefella bass player with big hair and a moustache playing rock n roll...

Notice the watch, the Seiko dual display, I'll put up a photo of me working at the jewellery shop in my day job wearing the same watch, (and moustache), pretty funny, mild mannered Watchmaker by day, hard core rocker at night ;-) 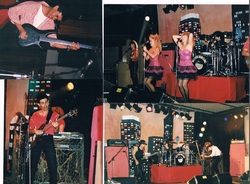 Debbie eventually convinced me to go pro about 10 years later, she had been working in a well established band named Incognito, which doubled as the backing band for a two girl show called Girls in Uniform.

The band/show had played most big venues in Queensland and NSW, and did supports for a number of big name Australian acts, before their bass player/lead singer decided to leave the band to become a promoter. Bass players who can sing lead are pretty hard to come by, but I thought it was time to stop being a watchmaker, and live the high life of a Pro muso.

It was hard work, a lot of touring, but it was very rewarding and I'm very glad I did it,  collage to the left with me playing bass and shots of Incognito and Girls in Uniform